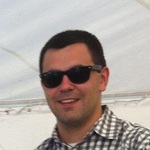 A commentator of sports, a coach, a teacher, a student, with a strong passion for communicating sporting news.