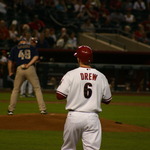 I'm a diehard Arizona fan, for any sport--except for Arizona State University. Although, I generally hate the state of Arizona. I was raised as an Arizona Cardinals fan since 1994, when we moved out here. My parents got us season tickets so they could see the New York Giants play here every year, since it was impossible when we lived in New York. As the years progressed, they turned into the most diehard fans you will ever meet for a team that has been that mediocre in its existence. Needless to say, the 2008 season was an absolute dream come true. I still can hear the "Superbowl" Chants that echoed in the University of Phoenix Game with 1:50 left in the NFC Championship Game. My parents are the reason for my passion for sports. Every Sunday was football Sunday during the season. My grandpa taught me to watch baseball too, and every summer in New York, I would watch many Yankee games, even though I was too young to understand. I hope that i have made him proud now that he's watching over me in my passion for the game.

But, my real passion is a team that plays at Chase Field on East Jefferson Street--The Arizona Diamondbacks. I attended my first ever baseball game in the 1998 season, sat behind homeplate and fell in love with the stadium and the team. Ever since then, I have lived for the Diamondbacks. I have stuck by them through the great (2001), the Mediocre (2008) and the bad (2004). I will never forget some of the moments they have given me, including a dramatic 2001 World Series win, and a perfect game amidst a 51-win season. They are my pride. They are my joy. They are my team.

I have even set some crazy goals that deal with the Diamondbacks. I want to see them play in every stadium, if possible. Although, my first goal is to see every Major League Baseball park, I hope to eventually see them at all of them too. The parks I have been to are: Chase Field, Kauffman (KC), Yankee Stadium (saw the D-backs there), the New Busch Stadium, and PetCo Park (Saw the Dbacks here as well). This summer I plan to go to Seattle to see the Diamondbacks take on the Mariners.

The Arizona Wildcats are a huge part of my life. As a student, I attend every football game, and even though my heart my be broken after a last second field goal, I will forever and always be a Wildcat at heart. I bleed red and blue. I was fortunate to travel to Las Vegas to see the Wildcats defeat the BYU Cougars in the 2008 Vegas Bowl. One of my favorite memories as a Wildcat fan.

I hope to one day work for any baseball team, even my least favorites--The Dodgers and the Red Sox--would be okay, because baseball is above all my favorite thing in the world.