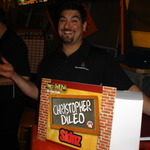 Chris is a member of the Fantasy Sports Writers Association (FSWA) and does freelance writing for several fantasy football sites which has included extensive work at www.fantasyfootballtrader.com

Chris will not deny the assertion that luck plays a major role in fantasy sports, but his motto is "luck favors the prepared".

Through Bleacher Report, Chris has had over a dozen articles appear on foxsports.com, and has had several articles linked from cbssports.com.

THE PICTURE is of Chris at Hooters in Las Vegas, as a top-eight finalist in a national Sports Buff Salary Cap Fantasy Football Contest.

2011 FFPC: suffered agonizing defeat in first round of league playoffs after finishing as #1 seed with 11-0 regular season record.

Note:
* Finished as the only undefeated team out of 814 teams participating in the FFPC
* #1 seed did qualify for automatic entry into FFPC Championship Bracket.

(Most points scored among all participating WCOFF teams drafting from the eighth overall pick...73 WCOFF leagues in total)