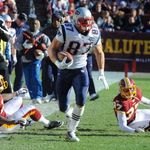 I'm a NFL fan first before being a Patriots fan and I know the majority of players in the NFL so you don't need to explain anything to me, except maybe stats because I sometimes lose focus with that. I was born in the Maryland area so I also like the Ravens and Redskins.