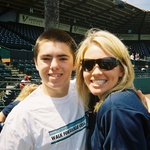 Lars Hanson your No 1 source for the Seattle Seahawks

Lars Hanson, a 15 year-old sophomore at Bainbridge High School. Lars writes about the Seattle Mariners, Seattle Seahawks and Seattle Sounders FC. Along with the B/R topic article every now and then.

Lars has been writing about sports since he was 13, and will plan on pursuing a journalism career.

Lars' articles are syndicated all across the net. Some sites that have his articles are...

Lars had had the opportunity to work with/along side ESPN's Mike Sando, Seattle Times' Danny O’Neil, Denver Post Woody Paige, Seattle Sounders FC and 710 AM ESPN Kevin Calabaro among others.

Lars can be found at

Lars' also has another B/R account-http://bleacherreport.com/users/149146-lars-hanson

Lars is not a member of any communities.