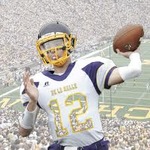 My name is Benjamin, I live in Tennessee but am a HUGE Michigan fan. (I have family there.) I also follow the Memphis Grizzlies, Nashville Predators, New Orleans Saints, Cleveland Indians, and Arsenal of the EPL. I am currently attending high school, but am planning to become a sportswriter as my profession of choice. I think writing for B/R would be a great step to accomplishing that goal.

Benjamin does not have any awards.