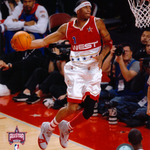 Tracy McGrady or "T-Mac" was born on May 24, 1979 in Bartow, Florida. Growing up in Auberndale, FL., T-Mac starred in both baseball and basketball at Auburndale High before transferring to Mount Zion Christian Academy in Durham, North Carolina for his Senior season. That year he was named "Player of the Year" in North Carolina by USA Today and The Associated Press while averaging 27.5 points, 8.7 rebounds, 7.7 assists and 2.8 steals per game.

T-Mac considered college (Kentucky) but ultimately decided to make the jump to the pros and fulfill his dream of playing in the NBA. The Toronto Raptors made him the 9th overall pick in the 1997 NBA Draft and the rest is history.

After three season with the Raptors (where he played alongside his cousin, Vince Carter), and four in Orlando, Tracy is now in his fifth season with the Houston Rockets. He holds career averages of 22.4 points, 6.3 rebounds, 4.6 assists, 1.36 steals and 1.02 blocks in 683 games and is a 7-time All-Star.

T-Mac also started The Tracy McGrady Foundation which has provided philanthropic efforts to various causes including The Special Olympics, The Boys & Girls Club, and Project Darfur.

You can read more about Tracy's efforts both on and off the court at: www.t-mac.com

Tracy does not have any favorite writers.