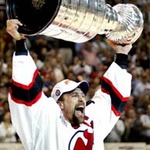 Sports is one of my two great loves, the other is movies. You should expect to see movie references in nearly all of my opinion articles, I'm sorry but I can't help it.

My favorite movie of all-time is Once Upon a Time in America, other favorites include Vertigo, Idi I Smotri, Double Indemnity, It Happened One Night, Apocalypse Now, and many more.

Enough about movies though, onto my passion for sports. I know that in my short life I have been blessed with successful sports teams. Though I was young I can remember the final SB the Dallas Cowboys won in 1995, 3 Stanley Cups from the New Jersey Devils, a New York Yankees dynasty from 1996-2000, and even got back to back NBA Finals appearances from the New Jersey Nets. I won't be satisfied though, I'd give an arm for a New York Yankees title right now, in a few months that would be the case for the Cowboys, and then the Devils and Nets. Sports will always be a part of me, I'm very proud of my teams and if you say anything negative about one of them...I...Will...Fight...You!

You might have guessed that my favorite athlete of all-time is Scott Stevens. How fitting is it that my idol that gave me so many great moments was the topic of the article that not only promoted me to Analyst but that brought me my first and currently my only POTD! On Sunday evening, May 10th, 2009, I wrote this tribute to the Hall of Famer that won the following day- http://bleacherreport.com/articles/172153-scott-stevens-forever-beloved-forever-hated-and-forever-remembered