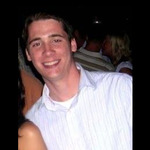 I don't know how these things are really supposed to go, but I'll give it the old college try. I grew up in Massachusetts, south of Boston. (Not to be confused with South Boston, although everyone always does) I went to school at Northeastern before transfering to The George Washington University, where I graduated in 2009 with a B.A. in Journalism. That's the where.

The when, why, and how are a little harder. I've always loved sports, for as long as I can remember, and the writing thing has just sort of happened as I got older. But looking back, it seems like the most natural progression in the world.

I grew up reading about and watching sports. The horn to end the second period of Bruins games was my bedtime for about as long as I had one. I can still remember my first game at Fenway when I was no older than seven or eight. (against Oakland) I still remember walking on the floor of the old Boston Garden and feelin the ice that peeked up around the edges of the parquet. I remember my first Patriots game (against Indianapolis) in the freezing snow on those old metal benches. These are the days that just stick out above all the rest, the days when, for better or worse, you became a fan.

But I also remember when they tore down The Garden; I remember when Cam Neely took the cheap shot from Ulf Samuelsson; I remember when Aaron Boone hit a Tim Wakefield floater into the night sky; I remember when Ray Borque finally left after the fans plead with him for years to just get one before he retired; I remember when the Patriots finally turned the corner under Parcells, made the Super Bowl, and got blown out; I remember finding a Reggie Lewis rookie card on my dad's bureau maybe five years after Lewis died, and I remember how I could never get a straight answer as to why that was the only card he ever owned as far as I know.

These are the days I learned sports are so much more than just games -- that they can hurt, bad. Sports are always finding new and interesting ways to break your heart. Through that, though, I learned that these silly games we love are more than just white lines and numbered shirts and wins and losses -- they're people's lives, and life isn't all roses and Stanley Cups. These are the moments that, as a writer, I find fascinating. That is what really hooked me.

So now you know a little bit more about me and why I'm here. There's more, to be sure, but hang around, read what I've got to say, and you'll pick up a lot more of what I'm about.

I guess that's the who.

T.J. is not a member of any communities.