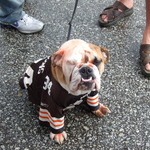 I'm a lifelong diehard Cleveland fan. Like many before me and after me, I've never been alive to see a pro sports championship in Cleveland, other than indoor soccer, and who cares about that? If it weren't for the Ohio State Buckeyes in 2003, I'd have nothing. To make matters worse, I live and work in Pittsburgh, where I am constantly reminded of their 6 Super Bowl rings, 2 Stanley Cups, and multiple World Series Titles, all of which have happened in the last 30-40 years.

Even though I'm a firm believer that Cleveland is cursed (just when I think I've seen everything, something, usually horrible, happens) and sometimes I think that Cleveland's teams may NEVER win a championship, my enthusiasm for Cleveland sports and pride in Cleveland's teams has never and will never falter. Rather, my faith remains stronger than ever, and one day, even if it's long after I'm dead, Cleveland WILL win and WILL become a city of champions. And when I do die, I'll be rewarded in Heaven with teams that dominate, to make up for the many years of suffering.

In case you wondered about my background (not likely), I wrestled and played baseball and football throughout my youth, finishing my athletic career as a two-year starter on the offensive line at Washington & Jefferson College (D-III), Washington, PA, where we were consistently ranked in the Top 10 nationally for Division III. I currently coach varsity football at Northgate High School in Bellevue, PA. I've always had a passion for writing and I am never short of opinions, which I hear is crucial for this type of activity.