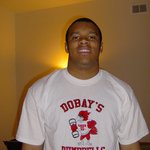 He grew up in Cleveland, OH raised as a Browns, Cavaliers, and Indians fan. He enjoyed the Indians' dominance of the mid-90s and is currently "Witnessing" LeBron's greatness on the Cavs. The Browns are finally back on the path to success, which gives a reason to celebrate.

David is primarily a fan of his home state college, The Ohio State Buckeyes. College Football is his passion. In an ideal world where money nor time mattered, he would tour the country like ESPN Gameday and watch a different game every week.

The best sports book David has ever read is Buzz Bissinger's "Friday Night Lights." More telling than the glamour of playing in front of 10,000 screaming fans every Friday, the book opens one's eyes to the less endearing behind-the-scenes aspects of big-time high school football. The high school football in some of these smaller cities is a way of life. The casual outsider views the players as demigods, but they are really tragic heroes, cast aside once their services have been completed. Buzz went a little crazy on Will Leitch and bloggers in general, but I still appreciate his body of work.

Will Blythe's "To Hate Like This is to be Happy Forever," a story about a man's love for UNC basketball is also a good read for the sports fan. Blythe follows Carolina's eventual National Championship season in 2005 as he interviews players, fans, coaches (including arch-nemesis Coach K), even priests to determine the root of his inner beast -- his hatred for Duke.

If you want to contact David or send hate mail, his email address is: dwil2750@yahoo.com.