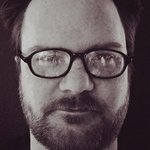 Jeremy Botter is a longtime mixed martial arts journalist and an MMA lead writer for Bleacher Report. He is the former associate editor of HeavyMMA.com and the former MMA beat writer for the Houston Chronicle.