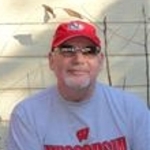 Bob was born and raised in Milwaukee. He felt an affinity to Wisconsin for three reasons early in his life. Bob was born in 1957, and that was the year that Lambeau Field was originally built and also the year the city of Milwaukee won their only World Series as the Braves defeated the Yankees in seven games. Plus, Bob was born on May 29th, which is the same day Wisconsin became a state in 1848.

Bob attended UW-Oshkosh for a couple of years where he became good friends with Kevin Cosgrove, who later became the defensive coordinator at the University of Wisconsin, and who now is defensive coordinator at the University of New Mexico under head coach Bob Davie. Kevin helped Barry Alvarez and the Badgers win three Big 10 championships and three Rose Bowls.

Bob finished up college at UW-Milwaukee where he majored in Mass Communication. Bob was also an intern at WTMJ during that time, plus he was kept on as a reporter after that for awhile. Bob was also sports director at Viacom cable in the Milwaukee area.

Bob helped his parents move to their winter home in Florida in 1983, and it was during that time that he met his wife Pam. Bob has lived in Florida since then, but Pam, son Andrew and Bob come up to Wisconsin every summer to Cedar Grove, where his family has a summer home right on Lake Michigan. Cedar Grove is only about an hour or so south of Green Bay.

As Bob looked for media jobs in Florida when he first moved there, he eventually ended up in sales, and was with Xerox for several years. Bob has also become the voice of Wisconsin on sports radio in the Tampa Bay area for over two decades. Bob has been a regular caller at 620 WDAE, where he is known as "Green Bay Bob" when he chats about sports.

Bob closely follows the Packers, Badgers, Brewers, Bucks, Golden Eagles and Panthers, but also enjoys sports in Florida as he is a big supporter of the Lightning, Rays, Gators and Bulls, plus enjoys the Bucs, when they aren't playing the Packers.

Bob always had the itch to return to the media, and he became a writer at a Packer website called ThaPack for a couple of years, before he joined Packer Report, where he was for several years, before joining Wisconsin Sports Online (Packer Chatters) writing about the Packers, Badgers and Brewers. Bob also occasionally writes for JoeBucsFan.com which covers the Tampa Bay Bucs, and also used to write for JoeBoltsFan.com which covered the Tampa Bay Lightning when the site was operational.

Bob also has a piece in the 2012 Green Bay Packers Yearbook that profiles the 2012 draft class for the Packers.

Bob worked as a Featured Columnist for Bleacher Report from November of 2011 into June of 2015, mainly covering the Green Bay Packers, but also did columns for teams like the Tampa Bay Lightning, the Tampa Bay Bucs and the Wisconsin Badgers as well.

Bob is not a member of any communities.