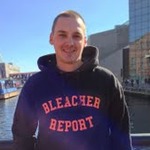 Born and raised in Brick, NJ, I've been a sports junkie all my life.

I honed my writing at William Paterson University, where I received a B.A. in English Writing in 2011 and a M.A. in Professional Communication/Writing for Digital Media. At WPU, I was the sports editor of the college paper, called the Pioneer Times.

Since joining Bleacher Report in October 2011, I have become a Featured Columnist for both the New York Giants and the MLB, represented B/R MLB FCs in a conference call with ESPN's Karl Ravech, Barry Larkin, John Kruk and Curt Schilling and have become a paid member of B/R's Breaking News Team.

You can find me on Facebook, Twitter and LinkedIn, and you can also read me on HoopsHabit.com.