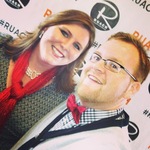 Had a blast writing for B/R from 2009-2012. Currently studying to become a pastor/church planter. Writing about ministry, church, and missions at joelabarker.com