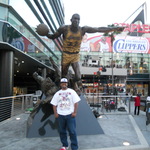 My name is CJ. Proud father, devoted friend, impossible sports enthusiast. I love the Raiders, A's, Lakers, and all Fresno State sports with a passion. But like most sports fans, I find just as much pleasure in seeing teams I despise get beaten. That includes in no short order the Yankees, Duke men's basketball, the 49ers, the Heat, the Spurs, the Patriots, and especially the Broncos, Chiefs, and Chargers in the AFC West.

I'm a journalism grad from Fresno State, worked in television news, and enjoying the ride! In my lifetime, I want to say that I've seen all 30 MLB stadiums across the country and visit every major sports hall of fame. So far, let's just say I have work to do! I write because I want to impart my passion and hear from fellow fans of the teams I love and that shorten my life span!

Clarence is not a member of any communities.

Clarence does not have any favorite writers.