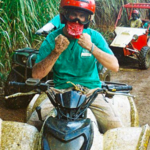 Jeff is a UCLA grad hoping to make a career out of sports journalism, broadcasting and photography. In addition to the Bruins of Westwood, he is a diehard Boston sports follower, having been born and raised in Rhode Island.

Jeff has written as a Featured Columnist for Bleacher Report, served as editor of GoJoeBruin.com and formerly worked with SportsWatch.com. He has also had freelance work featured by USA Today. Presently, Jeff is sports editor of the Paso Robles Press in Paso Robles, CA.