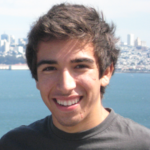 I'm a second year student at the University of California, Berkeley. I'm currently a Media Studies major and am a MLB Featured Columnist here at Bleacher Report. In addition to that, I'm a contributor to Cal's weekly sports radio show, Bear Talk, and a broadcaster for Cal football, basketball, and baseball, all on KALX 90.7 FM. I will shamelessly talk about or plug my high school whenever I can, the one and only Long Beach Poly High School: Home of Scholars and Champions.

And yes, I know my team preferences seem random, but trust me, there's a reason behind each of them.