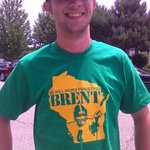 I'm studying journalism at Marquette University in Milwaukee, WI. Looking forward to the next time Providence comes to the Bradley Center to start a "Where's your brother?" chant directed at Jeff Xavier.

Brett Favre retired again recently. I spent maybe ten minutes total reading or watching coverage because I already saw and read everything that could've been said about him last year at this time.

The Vikings see our Aaron Rodgers and raise us a...Sage Rosenfels!? Really? The Rosencopter?

This happened at my first Marquette game when I was a high school senior: http://www.youtube.com/watch?v=Ai3fm7XKirU I hate Louisville.

I'm gonna make a conscious effort to write something on here every day. We'll see how that goes...

I'll admit it: I'll stop and watch a tennis match for half an hour. The athleticism involved is very underrated.

I wish Marquette was playing Indiana this year. Just to show Tom Crean he made the wrong short-term decision.

There was a point that I could've gotten into NASCAR, but then it got all popular and mainstream.

I firmly believe that Sterling Sharpe could've gone down as one of the top five all-time great wide receivers in NFL history if he hadn't gotten injured and spent four or five more years with Brett Favre chucking the ball for him. Easily.

JJ Hardy is probably my favorite baseball player. It's not about his glove or his bat. It's all in the eyes. I say that in the straightest way possible.

I really want to get into football (soccer). Any FIFA community members who want to help and happen to read this, please help me.

I ran a mile in less than five minutes once. Then I realized that world class marathoners run that time in 26 miles in a row. It don't make me feel too good.

The Milwaukee Bucks really let me down after 2001. I'll forgive them when they make the Conference Finals again, although a winning season will work fine too.

I've only followed one golf tournament. The one in which Tiger Woods beat Rocco Mediate in that playoff with torn knee cartilage. Tiger is tough, mentally and physically.

Bret Bielema needs to lose his Iowa Hawkeye tattoo. It'd probably be messy to get a Badger W done over it.

Joe Paterno and Bobby Bowden should try to retire tied for the lead in division 1-A head coaching victories.

The Green Bay Packers have a better history than your football team.