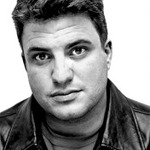 Dave Zirin, Press Action's 2005 and 2006 Sportswriter of the Year, has been called by Robert Lipsyte “the best young sportswriter in the United States." He writes about sports for the Nation Magazine, their first sports writer in 150 years of existence. He is also the host of XM satellite’s popular weekly show, Edge of Sports Radio, and his weekly column is featured on his website at www.edgeofsports.com.

Zirin is, in addition, a columnist for SLAM Magazine, the Progressive, sportsillustrated.com, and a regular op-ed writer for the Los Angeles Times.

Zirin’s new book is "A People's History of Sports in the United States," part of Howard Zinn's People's History series for the New Press. As former Yankee and Ball Four author Jim Bouton said of this work, "Finally, the long-awaited prequel to all the sports books you've ever read. Put this first in the line of sports books on your shelf. It will help make sense of all the others

He is also the author of "Welcome to the Terrordome: The Pain, Politics, and Promise of Sports" (with a foreword by the immortal Chuck D.). Sports Illustrated wrote that Terrordome is "a provocative, sometimes chilling, look at sports and society right now."

His first book "What's My Name, Fool?" Sports and Resistance in the United States" (Haymarket Books) has entered its second printing and is available in stores and at haymarketbooks.org.

Zirin has brought his blend of sports and politics to multiple television programs including ESPN's Outside the Lines, ESPN Classic, the BBC's Extratime, CNBC's The Big Idea with Donny Deutsch, C-SPAN's BookTV, and Democracy Now with Amy Goodman.

He has also been on numerous national radio programs including National Public Radio's Talk of the Nation and All Things Considered; Air America’s On the Real' with Chuck D and Gia'na Garel; The Laura Flanders Show; Radio Nation with Marc Cooper; ESPN radio; Stars and Stripes Radio; WOL's The Joe Madison Show; Pacifica's Hard Knock Radio, and many others.

He is also the Thursday morning sports voice on WBAI's award winning "Wake Up Call."

Zirin has debated FOX Sports president Ed Goren on college football’s Bowl Championship Series for National Public Radio, Bridgestone Firestone President Dan Adomitis in the pages of the LA Times on whether his company should be the “official tire of the Super Bowl” while in court for using child labor in Liberia, and the issue of steroids in sports with Jose Canseco and John Rocker.

In addition he just signed to do a book with Scribner (Simon & Schuster.)

Zirin is the author of a children's book called "My Name is Erica Montoya de la Cruz" (RC Owen).

His writing has also appeared in New York Newsday, the Baltimore Sun, The Dallas/Ft. Worth Star-Telegram, the Houston Chronicle, the San Francisco Chronicle, CBSNEWS.com, The Pittsburgh Courier, The Source, and numerous other publications.

Dave is not a member of any communities.