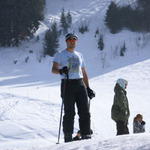 Utah born and raised and yet my sports fanship runs from Miami to Chicago thru Denver and back to Salt Lake and Provo. I played baseball in high school and college and am partial to that sport, however, I love pretty much all sports and games. I live for competition. Nothing is more exciting than proving yourself better than the other guy. I am a father of four little ones and husband to what I consider the most beautiful girl in the world. GO JAZZ, COUGARS, DOLPHINS, BEARS, CUBS, and ROCKIES.

Dustin does not have any awards.