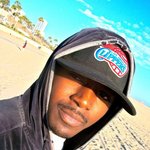 This is Kris coming live and direct, in full effect from the great state of California. A proud resident and representer of the City of Angeles. Writing, music, and sports (particularly basketball) are several of my favorite hobbies and I'm proud to say that I'm pretty fly in each to an extent lol

Growing up I spent most of my time with a basketball in my hand, even at the young age of three. How do I know this you ask?? Because my parents still have the home video with my small framed body and freakishly large Stewie shaped head playing in the backyard with my older sister working on both right and left handed dribbling, freshly "styling on 'em" in my youth sized Air Jordan II's!! Finally, after years of working and trying to perfect my game, I tried my hand at football in my early teen year but soon decided I'd rather remain a spectator at home on Saturday and Sundays lol.

Perhaps one of the most life changing moments to take place thus far in my life is when I became a ballboy for the Los Angeles Clippers at the age of 15. I've always been a fan of the underdog and vividly remembering watching a young Danny Manning and Brent Barry on television with my dad whenever the games came on. He taught me the value of what it meant to be a true fan, rather than a fly by night, fair weather fickle type of sports person who's not grounded in themselves! Although it was risky, I can recall one time my father and I went to the Great Wester Forum for a Lakers vs. Sixers game. Now, this was in the very early 1990s, and the Showtime era was still buzzing somewhat in the air. Yet my father was unmoved and fearless as we walked through the building as cold eyes mixed with boo's and yells were aimed our way, simply because my dad was wearing an all red Sixers Starter jacket with a HUGE "76" logo on the back. Talk about going hard in the paint for your team!!

So the moral of all that was just to let you guys know it really doesn't get much more laid back than this. Give me good food, good music, good conversation, and a good game on the tv....then you've got a pretty dope friend ;)

kris does not have any awards.