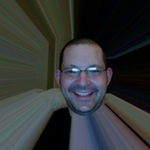 Timothy has been a writer for most of his adult life. He has a background in comedy writing, and toured the nation as a stand-up comic before he went back to college for the third time.

It was a charm.

For a hobby he writes mysteries, and even had a short story published last spring. He also enjoys writing movie reviews and has had a few of those published as well.

Timothy has only recently begun writing in the third person.

When he’s not writing, he’s usually either reading or playing softball—sometimes simultaneously. The game is that easy for him. He plays in three leagues year round.

He likes to say that if he were “three inches taller, left handed, and way more athletic…” he’d still be playing ball somewhere. Indeed, and that type of “ball” would still be of the “soft” variety.

He loves baseball and has been playing it since he was eight years old. He's more of an athlete than a mathematician. That's why he thinks some advanced statistics are dumb.

Much like baseball pants that break at the knee rather than the shoe tops—Timothy is old school. He doesn’t wear a fedora, chain smoke or refer to women as “sweetheart”—that’s a different kind of old school, and not the good kind.

Timothy’s brand of old school is the kind that writes in pencil and refers to REM’s “Automatic for the People” as their “new” CD.

Timothy graduated from Texas State University (eat ‘em up Cats) with an M.A. in Mass Communication. He holds a B.A. in Radio, Television, and Film from the University of North Texas—but sets it down before the food arrives.

At UNT he minored in English because all the hours he spent drinking beer aren’t the kind of hours that transfer to an accredited university (except for maybe the University of Phoenix).

He is a die-hard Texas Rangers fan and loves the Dallas Mavericks. He’d rather not talk about the Cowboys—too soon.