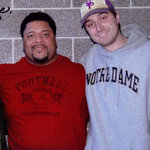 And now, standing 6'7", from the University of Wisconsin-Stevens Point, class of 2007...well, you get the idea.

Born and raised in Milwaukee, Wisconsin, I grew up rooting for my hometown teams because I knew of nothing else, and I continue to do so because I don't know any better. The Bucks and Brewers will always break my heart, but I cheer on every win because I refuse to become a bandwagoner and switch teams.

I believe the Bucks have another NBA Championship in them (rather than just the one in 1971) and I KNOW I will see the Milwaukee Brewers win their first World Series in franchise history (although they should have won it in 1982).

I love the fact that the Green Bay Packers are city-owned and as a result have no single owner. The smallest market in all of the NFL, but the most storied franchise that the league has ever seen. 13 League Championships, 13 Division Championships and 9 Conference Championships.

For my "day job" (more like night), I work for the Daily News in West Bend (a smaller newspaper in Wisconsin), covering a variety of high school sports, with a few surprises thrown in, just to mix things up. For any fellow Cheeseheads out there living in the Washington County area, pick up a copy and check out the exciting world of small-town, high school sports.