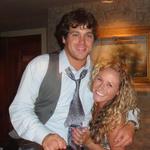 Jeffrey Beckmann enjoys writing about sports just as much as he enjoys writing in the third-person—a trait in which the Sergeant mastered during a four-year stint in the United States Marine Corps (2002-06).

Although Mr. Beckmann now works in the accounting/finance field by day, he longs for the moment he's able to step out of the office scene for good to be a full-time writer. It is his true passion.

Jeffrey laughs at everything, while his wife tells him daily he has some growing up to do. He enjoys incorporating some of his attempts at humor in his articles.

Mr. Beckmann is also fascinated by MLB history. He claims that the reason he is so good at numbers is from analyzing the baseball section of the sports page every day as a tot.

Jeffrey and his smokin' hot wife currently reside in the Nashville-area. Boogadi Boogadi.

If you have any questions, send Jeffrey a message and he will be more than happy to help you out. He thanks you all for your support.