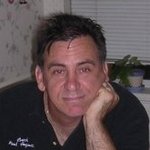 Paul Augustin has been a sports fan since he was old enough to walk. He has been a Saints fan since the franchise.was granted, saw Tom Dempsey's amazing 63 yard field goal in person, and was present for the Saint's first game in the Superdome and first playoff victory..

Paul sold programs in the old Tulane Stadium for many years so he could get in and see parts of the games and was present at all of the Superbowls at the venerable old stadium.

As a child, he used to walk to go see the New Orleans Buccaneers games when the old ABA was around. and spent many mights in the cheap seats in the upper deck of the Superdome watching the New Orleans Jazz.

His father was a Tulane grad, but he has always been an LSU Tiger fan, even through the Curley Hallman and David Archer years.

Paul has played football, soccer, baseball, softball. track, racquetball, bowling and volleyball. He is a former FIFA certified referee and has coached basketball and baseball including serving as assistant on 2 state champion basketball squads and one national champ.

Paul's oldest son, Paul Augustin, Jr., is an excellent writer on B/R and is father of future sportsman Joshua Paul Augustin who was born May 16, 2009 at 4:38 PM in Lafayette, LA.