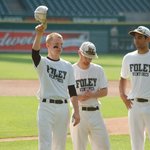 Well, where do I begin? I'll start with thanking you for reading my material, I really appreciate it. Whether your reading my stuff just to be a good friend or family member, or if you are actually interested in what I have to say, I thank you for reading.

I am currently a sophomore at the best university in the land, Michigan State University. I come from the best high school in the land, Bishop Foley Catholic High School.

I always wanted to turn sports in to a career, and after getting cut from basketball and being a tackling dummy in high school, I realized my athletic career wouldn't be so likely, so that's how I found myself in journalism.

I want to thank my awesome family, my great friends, and my wonderful girlfriend for their support.

Well, you made it through my boring bio, and I will leave you with a big GO GREEN (and Tigers, Lions, Red Wings, FC Barcelona, Team USA, Cubs, and any team that plays U of M)!