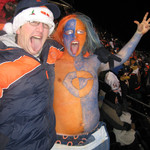 I am a 28 year old Enterprise Rent a Car worker currently living in Honolulu, HI.

I am a born and raised, die hard Bears fan. They are my #1 team.

I like the watching the Mets, Cubs, and Rangers. All that said, the best fans in Major League Baseball are Cardinal fans.

I wasnt a Jordan supporter during his reign cause I was a Reggie Miller and John Stockton fan and Jordan always seemed to beat them. I liked the Bulls after Jordan left AND those 2 years where he failed at baseball. My favorite player of all time is Horace Grant. Specially once he started rocking the rec specs for the Magic.

So: Bulls, Pacers, Twolves and Melo (I cant help it, whatever team he is on, I will cheer for)

Grew up a Joe Pa fan so Penn St. is my college football team. I have been living in Hawaii for nine years now, so I also cheer on the Rainbow Warriors of UH in all sports. I also support the Syracuse Orangemen and the Bradley University Braves.

In terms of hockey, its only two teams: New Jersey Devils and the Chicago Blackhawks.

I have a biased point of view, sorry.