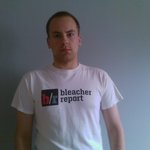 I am 25 years old and played soccer for a large portion of my life before finally deciding it was time to go in another direction and sports writing was that direction. I love messing around with statistics and trying to find new ways to better analyze how players are actually performing and whether or not they are helping their team succeed.

After completing the summer internship on Bleacher Report, I have joined the site full-time as a member of the Breaking News team. It is great to be a part of the staff at one of the fastest-growing sports sites on the Internet.

My favorite part of the sports calendar is the first two days of March Madness (when my bracket still has a chance) because of the non-stop action and the chance to learn some great stories about players you otherwise would have never known about.

The only two sports I don't religiously follow that are covered by Bleacher Report are MMA and boxing. Even those I keep an eye on, though. Other than those two, I will pretty much watch any live sporting event that is on television (even curling).