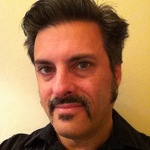 I am the host of "Content Is King," weekdays at 2 pm ET on SiriusXM Bleacher Report Radio, Channel 83. I interview sportswriters, authors, broadcasters and other media figures about their work. I call it Terry Gross for sports.

I am also a Lead Writer Editor at Bleacher Report, working mostly on longform feature stories. I joined B/R in 2011 after spending 14 years at Salon.com, where I wrote the King Kaufman's Sports Daily column/blog from 2002 to 2009. I was also copy chief, associate managing editor, features writer and cover editor at various times at Salon. From 1989 to 1996 I worked for the (Hearst) San Francisco Examiner, where I covered boxing, as well as working as a writer and editor on a variety of desks.