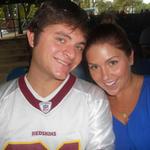 I have lived in the D.C. area my entire life. Ever since I can remember I have been a die-hard fan of all local sports teams, however, it wasn't until college until I realized that I wanted to write about them. I am new to the Bleacher Report and will provide articles based on Washington's college and professional teams. Hope you all enjoy.

Oh and I don't want Cowboys fans reading this.

Tom does not have any favorite writers.