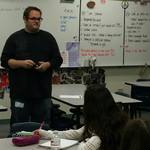 Danny Webster is a member of the breaking news team at Bleacher Report, and is a soon-to-be graduate at UNLV majoring in journalism with a minor in history. He spent four years at his college newspaper, The Rebel Yell, writing sports and being an editor in some capacity. Danny has also done freelance work for the Los Angeles Times, Orange County Register and Kansas City Star. If not for coffee and Red Bull, he would not be here today.