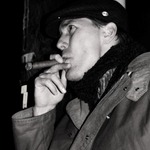 I'm of the opinion that every American boy should, at one point in their life, get on a pair of boxing gloves and go at it for two rounds. it should be a right of passage like oiling your first baseball mit or tying your first bowline knot.

As a traditionalist, and a purist, I refuse to follow MMA. I think you've either got to be a boxing fan or an MMA fan. Not both.

I'd like to see exactly one sanctioning body over boxing and the number of weight classes reduced from 17 to 8.

I think someone once wrote, 'writers aren't born, they're made.' If someone didn't write that, then I'm taking credit for it. I write because I have too. It's in my blood. I feel that much that is written on Bleacher Report is as good, and often times better, than what's written in the mainstream media.

Most of the time I enjoy the collaboration and banter with the other writers (with the exception of Floyd Mayweather Jr. fans). It's a solid community and I've enjoyed being part of it.

I graduated from Washington State University with a minor in creative writing. I'm currently working on publishing my second novel.