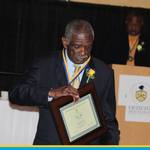 Honor Warren Wells has yet to fill out a bio.