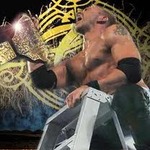 The name is Kevin Stonebarger, and I am a premiere writer here on Bleacher Report. Don't let the rank of Contributor fool you, because I am a crafty veteran. I've been around for a year, and I have become one of the best of the Wrestling section, excuse me if that sounds arrogant. I have learned from the best in RiZE, who is very good friends with me, and I have also gotten praise from Jacob Waring, Chinmay, and Dan Power. Wrestling is a big time passion of mine for years, and I love that I can give out my thoughts on the happenings of it right here on Bleacher Report. This site has been awesome to me, and I'll be here writing for you all for a long time.

Here are some big achievements for myself through my career.

March 16, 2011 - My first Gold Achievement Award. It was on an article about the situation on Snooki being a part of the Wrestlemania card. Shockingly getting over 100 comments, it was my first high level medal for me on the site, and it was a big time achievement for me. My first step to being one of the best here on the site began.

July 30, 2011 - I have officially recieved 1000 comments overall here on Bleacher Report, and man does it feel good. Another huge step for me on the site, it is definitely something to be proud of. It proves that people actually give a damn about what I write about and want to write their thoughts on it. Thanks everybody.

July 31, 2011 - I have now reached the 100,000 mark in terms of reads, ladies and gentlemen! This is a glorious day indeed for me! I have now cemented myself among the likes of RiZE, Dan Power, and Chinmay as one of the best here! Seriously, getting this many reads is no easy feat, but I did, and I am so proud of myself right now!

August 4, 2011 - I'm finally promoted here for the first time on Bleacher Report! No longer am I just a Contributor, now...I am a Correspondent! Man, it feels good to say that! All my hard work finally led to this, and I'll be climbing up the ranks soon, so a good day for me! So awesome!