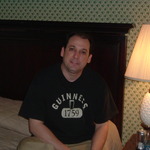 I'm a lifelong Arizona Cardinals Football fan. I was born and raised in Phoenix, Arizona and now live in Glendale, Arizona with my wife Kelly and our 3 cats. The day we finally got a football team was one I'll never forget. It didn't matter that we were playing in Sun Devil Stadium. SDS, which sounded like something one may contract while engaging in nefarious activities.

Before those glorious days, however, I spent most of my childhood watching Dan Fouts throw touchdowns to Kellen Winslow (my favorite TE ever), Charlie Joiner and John Jefferson. I was rooting for Dallas when Joe Montana won the game in the final seconds with "The Catch." I love all things football and for the most part like all the teams. The one exception to that is the Steelers for the last couple of years, but that's another story.

I'm wholeheartedly against all the new hit rules and other nonsense the league, and commissioner Roger Goodell, have enacted in the last several years. There's a place for defense in the league. It's always been a part of this league and so have big hits. It's supposed to be hard to move the ball. The game was built on that difficulty. If they make scoring in Pro Football any easier than it already is it'll devolve into a lesser quality product similar to the Arena League, or UFL.

Richard is not a member of any communities.