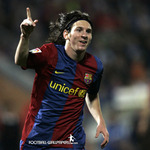 A True Barcelona Fan... well it says everything about me... If it doesn't, read this
http://bleacherreport.com/articles/730798-fc-barcelona-being-a-true-cul-the-10-commandments-for-real-blaugrana-fans

Lionel does not have any awards.