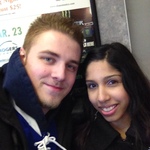 Since I can't write on here, I'll be starting a blog on Blog spot, check it out here:http://leafstalkwithtyler.blogspot.ca/

Besides sports I have also have 4 nephews, two of them are twins that are 6, and the other two are 4, and 2. I have intentions to make them all leaf fans!

If you want to ask me anything, feel free to leave a note on my profile bulletin board, or tweet me at Tyler_hillVP