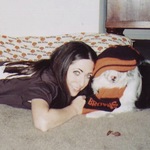 Samantha was born in Arizona, but grew up in Cleveland. There she acquired the childhood nickname of Buh, after Al Bubba Baker (fortunately not due to any physical resemblance), the requisite chip on the shoulder that all Cleveland fans have, and permanent frostbite from attending Browns games in December. Her love of sports and tendency toward attachment to teams that choke began with the 1986 Browns.

After suffering through The Drive, watching Bill Belichick run her team into the ground while blaming it on Bernie Kosar, and even forcing herself to root for Vinny Testaverde, the Browns rewarded her for her loyalty by leaving town.

Unable to find a suitable replacement team to adopt, she switched her primary devotion to baseball. She fell in love with the Indians and the game itself, and before she knew it found herself reading scouting reports and uttering the phrase "sorry, I don't have time to date during baseball season."

Like her hero Crash Davis, she's got an "I believe" speech. Inspired by the effect of Crash's speech on Annie, she hopes to someday use the following to impress Scott Van Pelt:

She believes that either baseball or Miller Lite is her soul mate, that Omar Vizquel is the greatest defensive shortstop in the history of the game, and that Jose Mesa may be the embodiment of pure evil. She believes in respecting streaks, the power of a sell-out crowd, and that a 6-4-3 double play can be one of the most beautiful things in the world. She would rather steal home than hit a grand slam, thinks that the bench clearing brawl is an art form but that it is rarely executed to perfection, and that the 1919 Black Sox may have been the greatest team of all time. She believes that MLB should outlaw purple jerseys, the wave, and Joe Morgan. She believes that the home run is overrated and the triple is underrated, that Lou Pinella throws the world's best tantrums, and that Jamie Moyer is often the only thing that gets her out of bed in the morning.

She thought it best to provide a few additional details for a more complete description of herself in case she ever gets any fans, enemies, or stalkers: She has several useless talents which include shooting pool, crosswords and picking locks, but she is a terrible bowler, can't seem to stop stealing holiday decorations while out drinking, and has a problem with authority.

She blames Art Modell for her trust issues, her Cleveland Stadium Dog Pound training for the time she got kicked out of a Penn State game for throwing things, and 10-Cent Beer Night for the fact that she can no longer upgrade her seats at ball games through squatters rights.

Her fastball tops out at 55.

Samantha is a displaced Browns and Indians fan living in New York. She is the Senior Sports Editor at CineSport.