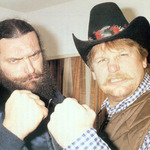 Greetings and salutations, my Bleacher Report brethren. I have returned and my hammer is powerful and unrelenting. Why? Because someone has to make you people realize that you are in a public forum that can be seen by MILLIONS of people around the world.

I am one third of an elite troika that comprises a renaissance, Pro Wrestling Zeitgeist, a true beacon of pro wrestling information and discussion.

“What I say today everybody will say tomorrow, though they will not remember who put it into their heads. Indeed they will be right for I never remember who puts things into my head: it is the Zeitgeist.” --George Bernard Shaw

Pro Wrestling Zeitgeist celebrates the spirit and essence of our favorite sport and spectacle. As lifelong enthusiasts and aficionados, we regard pro wrestling as a transcendent form of theatrical entertainment that reflects the dominant themes and attitudes of our time. PWZ blends analysis, opinion and humor to convey our appreciation for wrestling as both art and entertainment.

I am represented by my publicist and manager, Mistah Zeitgeist, and a powerful legal team headed by M. Zeitgeist Cochrane. They are temporarily on leave as they are touring the nation, spreading the word of PWZ and engaging in a mind boggingly awesome PR campaing. They are also negotiating the contracts and brokering the big deals that make Drew Rosenhaus look like an amateur.

Log on to the PWZ online blog at http://pwzonlineblog.blogspot.com/ on Monday, September 6 at 8pm to witness the press conference where the second and third man of this project shall be revealed!

J. does not have any awards.

J. is not a member of any communities.