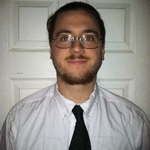 My name is Donald Wood, and I am a WWE writer for Bleacher Report.

For the fans that need more of me, go check out Ring Rust Radio.

If you have any ideas, concerns, or questions, please feel free to contact me and become a fan!