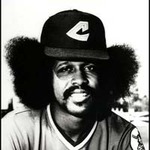 Mitchell Below is a freelance writer and copy editor, a lifelong Indians fan and the creator of the blog TribeScribe. A graduate of Ohio State University and recently converted Seattle-ite, he is a member of the Northwest chapter of SABR.

He often wonders what hat size Oscar Gamble wore, and he has it on good authority that "Bull Durham" is the most accurate baseball movie ever made.