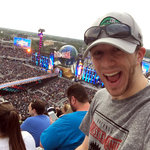 “Your future hasn't been written yet. No one's has. Your future is whatever you make it, so make it a good one.” -Doc Brown

A Journalism Major at Endicott College, Graham Mirmina (aka Graham “GSM” Matthews) joined Bleacher Report in May 2010 before becoming a Featured Columnist the following March. Since then, he has had his work featured on several established sites and is also currently a contributor for What Culture, Hidden Remote, and Pro Wrestling Shirts. Living in Connecticut, he has attended several Raw and SmackDown tapings over the years, as well as indy events and house shows.

Outside of watching wrestling, GSM has been training in Sambo and Brazilian Jiu-Jitsu since January 2010. Other interests include Back to the Future, Ghostbusters, Psych, Monk, The Muppets, rock music and more. Through his writing, GSM looks to inspire, entertain and enlighten others with his vast knowledge of wrestling history. His ultimate goal is to one day work for WWE in some creative capacity.

Add on Google Plus:
https://plus.google.com/u/0/+GrahamMirmina/posts