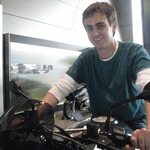 What's going on, the name's Ross, and it's a pleasure to see you care enough to read this far.

I was born and raised in Los Angeles California, and am now attending Northwestern University for journalism.

I love every sport that isn't on ice and have been writing about sports ever since I figured I wasn't athletic enough to play.

Update: As you can see, I'm no longer a Featured Columnist. I will be on my journalism residency from March-June, so I am not allowed to post here.

Check out http://rlipschultz.weebly.com/ for everything Ross.