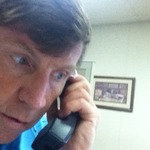 Offering the perspective of a lifelong college football fan with a novelist's insight and touch, the storyteller in me guides my right brain as the left side sorts through the numbers. It all sloshes around in my skull, resulting in what has been called an unusual point-of-view.

I played the game during the final days of the shamed Nixon Administration as a 5-10 175 lb. offensive lineman on the high school level. Accepting the anonymity, I was motivated by a) my team's victories, and b) executing the pancake block. My last year, we were 6-4 and I usually got 1 to 2 or sometimes 3 pancakes a night. That's not quite IHOP, but it was good enough for some All-Whatever votes.

The pancake quarry was generally maniacal linebackers who didn't know what the hell they were doing. It was big-time fun.

Check out the bent nose in the photo. It's sort of looking your way. One crisp moonlit Friday night in the autumn of 1973, an opposing linebacker delivered a forearm shiver through my facemask squarely to the nose. It was painful, but I turned around when the whistle blew and walked to our huddle, thinking nothing of it, just another day in the neighborhood. My teammates told me the nose was flat against my face. I felt the nose. They were right. The only choice I thought I had at the time was to set the broken nose to its near-normal position by pulling the nose away from my face, then line up and go after that linebacker's head. If I would have used my left hand to set the nose, the nose would be bent the other way.

And, that's how I write.

I have written two novels. The first, Wise Fools, a 32.00 USD 225,000 word gushing, foaming, swirling brain download, like an endless roaring stream of Class V rapids, has a 1970s pine-riding college football wideout protagonist. The second, Risk, Return, and the Indigo Autumn, half as long, much more reasonable and readable and enjoyable, is available for a quarter of the price in the Amazon Kindle format as well as on iBooks. That novel is the story of the pine-riding wideout and his final months as a loser stockbroker during the go-go days in the decade of the '80s.

Also in my mind is a screenplay about college football in the decade of the 1960s.