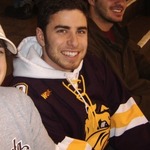 Ryan Simon is a Bay-Area native and San Jose Sharks fan, he played hockey with the Oakland Bears beginning in 2000, he currently plays in the over-18 Men's league in Oakland, CA. He attended the University of Minnesota, Duluth his freshman year of college.
He writes primarily about local Oakland issues as a reporter for the Laney Tower, and Middle-Eastern Politics for his blog, but has recently turned his love of hockey into writing.

Ryan is not a member of any communities.

Ryan does not have any favorite writers.