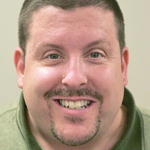 I've beaten Bill Gates in a one-on-one battle of "Dead or Alive". George Steinbrenner gave me a 1996 World Series ring. Cecil Fielder once told me I was a funny little doofus.

On the flip side, I've edited computer-for-dummies textbooks, managed a Waldenbooks and an FYE and been an adult paperboy to pay the bills.

Somehow, I always end up back with sports. I've wanted to be a journalist since I was 8 and once thought I was going to be the next Woodward or Bernstein. But I just love the drama and the endless stories around sports.

I've been on both sides of the game - as a major-league (Yanks) and minor-league baseball exec (Savannah Sand Gnats GM) and as a reporter and columnist for a suburban New York daily.

My wife and I moved South to Savannah for the Sand Gnats gig. When that didn't work out, I landed on my feet with a small daily just outside of Hilton Head called Bluffton Today.

I am a diehard baseball and football fan - both NFL and college football. I've adopted the Clemson Tigers as my team after a trip to Death Valley (plus, I can't stand Steve Spurrier or Mark Richt). I've been playing fantasy since the days of tracking stats in USA Today and Baseball Weekly. I'm a proud baseball nerd - I still play Strat-O-Matic and Pursue the Pennant.

I grew up in Maine and New Hampshire, spent the first decade of adulthood in New York, went home for a couple years and now am a Yankee in the South.

And I love Jim Rice.