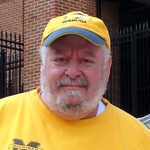 I’ve been around sports since the third grade, riding the bus with the “big kids” to Detroit Red Wings and Tigers games. Probably my best moment was not earning all-city honors in golf, nor coaching a youth football team to an undefeated season. It was actually scoring a goal in a pick up hockey game at the old Olympia Stadium in Detroit.

Now a Featured Columnist for Michigan football at Bleacher Report, I’m delighted to share my interest in the Wolverines. As a student at the University of Michigan, I joined the sports staff at the student-run Michigan Daily in 1969—once taking a taxi-cab from Duluth, MN to Houghton, MI with six young ladies headed for the Winter Carnival at Michigan Tech.

The following year I began phoning in Michigan hockey covers to the Ann Arbor News while on the road.

I also spent time with the Michigan Athletic Department, serving on the Advisory Committee for Recreation, Intramurals and Club Sports.

Other than journalism, I also worked in advertising and printing before my retirement in 2009.

I've recently spent some of my spare time coaching golf for the First Tee organization, a group affiliated with the World Golf Foundation and Hall of Fame in St. Augustine, FL.

My current nickname evolved on the second floor of the (University of) Michigan Union sometime in 1970, when the Student Activities Center sponsored a billiards exhibition with Luther "Wimpy" Lassiter as himself. Assigned the story by the Michigan Daily, I arrived on the scene an hour early, hopefully in time for a casual interview with a great pool shark, and a quick lesson.

Wimpy ripped my stroke, all right, and joked about my " obvious" resemblance to his pal, "Minnesota Fats." With the grace of Paul Newman, Wimpy displayed his skills by sinking ball after ball: 10, 20, 30 in a row.
It was probably 20 minutes later, when he finally lost the table. "Don't take all day, Minnesota," Wimpy joked."
The joke was really on me as my buddy hollered across the room, "Luther, he's not from Minnesota, he's from Michigan."