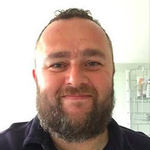 I was born on St. Patrick’s Day 1971 in Barking, East London. I’ve been a football fan for as long as I can remember and during my formative years my bedroom was adorned with posters of Cruyff and Neeskens, and pendants of FC Barcelona. The first football shirt I ever owned was the classic Blaugrana of Barca.

I've been lucky enough to attend some wonderful games over the years, more recently the 2007 El Clasico (Messi’s first hat-trick), Champions League finals in 2009, 2011and 2015, and the match which gave me the outstanding football memory of my lifetime - the 2009 Champions League semi final when Andres Iniesta's injury time goal at Stamford Bridge took Barcelona to Rome.

Through my work, I have been privileged to interview many people from the football world. Carlos Alberto, Brazil's 1970 World Cup winning captain, and ex-FC Barcelona president Joan Laporta are my favourites to this point.

I freelance for a number of print and digital organisations and am not averse to the odd bit of live TV work too!

My own website is: www.jasonpettigrove.com where you can find links to most of my work.

In my spare time, I am the Relations Delegate for Penya Blaugrana London, the Official FC Barcelona Supporters Club in London and one of two representatives from London to be part of the World Federation of Penyes.

I collect football memorabilia and my favourite piece to date is the shirt that Lionel Messi wore when he scored all four goals for Barcelona against Arsenal in 2010.