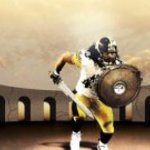 Hi everyone I'm Ahmad. I'm 19, and I'm a die hard Steelers fan. I first started liking the Steelers after we won the divisional round against the Jets in 04.

I soon started learning about football and Steelers history. I quickly became fascinated in Big Ben, the Bus, and Troy Polamalu. After winning the SB in 05, I declared my permanent allegiance to the Steelers. Since then I have never given up or betrayed my team.

I've been on BR for two and a half years and I have learned a lot of things and have met many great people. I want to recognize 3 certain people for helping me become successful on this site.

Spencer Tucksen, Senior Writer and Syndicated Writer. He started out around the same time as I did and since then he has been a good friend to me and has helped me improve in a lot of things.

Nick Signorelli, Senior Writer, Syndicated Writer, and Community Leader for the Pittsburgh Steelers. I have liked Nick since day one. He has given me plenty of helpful hands and is one of the kind hearted writers on here.

Timothy Kessler, Analyst and Syndicated Writer. I have vastly improved in my debating skills under this guy. Even though he may not know it, he taught me how to be smarter in my arguments and how to keep an open mind about others opinions.

They're are others who have helped me in some way or form, but I really wanted to give credit to these 3 guys for everything they've done for me. Thank you.
On December 9, 2010, I got promoted from Correspondent to Analyst. I had been waiting for a long time and it finally happened. Thank you BR staff.